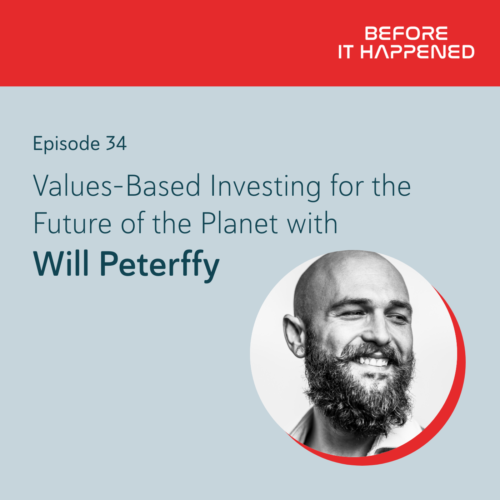 Will Peterffy always knew he could enter the family business.

His father is the billionaire high-speed investment pioneer Tom Peterffy, who in 1977 launched Interactive Brokers, the first-ever digital trading platform that transformed how stocks are bought and sold. Will grew up with a deep understanding of capitalism and economic principles and he always knew a job in finance was there for the taking if he wanted it—but he was never sure he did.

“I knew what my dad did, and I understood what my dad did,” Will told me. “I just had other interests. I spent a lot of time outdoors, and I was always very drawn to the natural environment. That’s really informed everything I’ve tried to do in my life.”

Will’s journey away from and back to the world of finance has taken him all over the world. He grew up in Connecticut, but rather than take the Ivy League business school route, he chose the University of Colorado at Boulder, where he majored in environmental studies.

He later became a certified yoga instructor and was certified in natural therapeutics. For a period of time, he worked on a regenerative ranch in Montana, mending fences and herding cattle. He graduated from college in 2013 and spent the next six years jumping between Wall Street — working for various hedge funds and brokerage firms—and his environmental and natural-living pursuits.

Will finally joined his father at Interactive Brokers—where he’s currently the head of Environmental, Social and Governance (ESG) investing—but he took a circuitous route to get there. His love of the outdoors and his concerns about the environment and society as a whole imbued in him a consciousness that didn’t always connect with traditional investment practices. So he decided to help people—specifically young people new to investing—put their money where their hearts were.

He recently spearheaded the development and launch of Interactive Brokers’ new investment platform, IMPACT, which enables users to easily find and invest in companies that share their values around issues like sustainability, diversity and social justice. For Will, it’s not the role he always saw for himself, but it’s where he realized he could make the biggest difference.

In some ways, IMPACT works like other investment apps we’ve seen—you open an account, transfer in some money and start trading. But IMPACT lets you specify your own personal values and search just about every public market for the companies that align themselves with those same values.

For Will, IMPACT has been the culmination of a lifelong pursuit of symbiosis between finance and the world around us.

“Eventually it hit me and I started to focus on what I could do to create a more holistic and inclusive values system throughout our economy,” he said. “I started to see and understand the massive impacts that our financial decisions have. But I also started to see how most of our decisions having to do with large-scale finance are really just singularly pointed at that single bottom line of monetary return. Impact and values were really just left out of the equation. My goal became to change that, which is what we’re doing.”