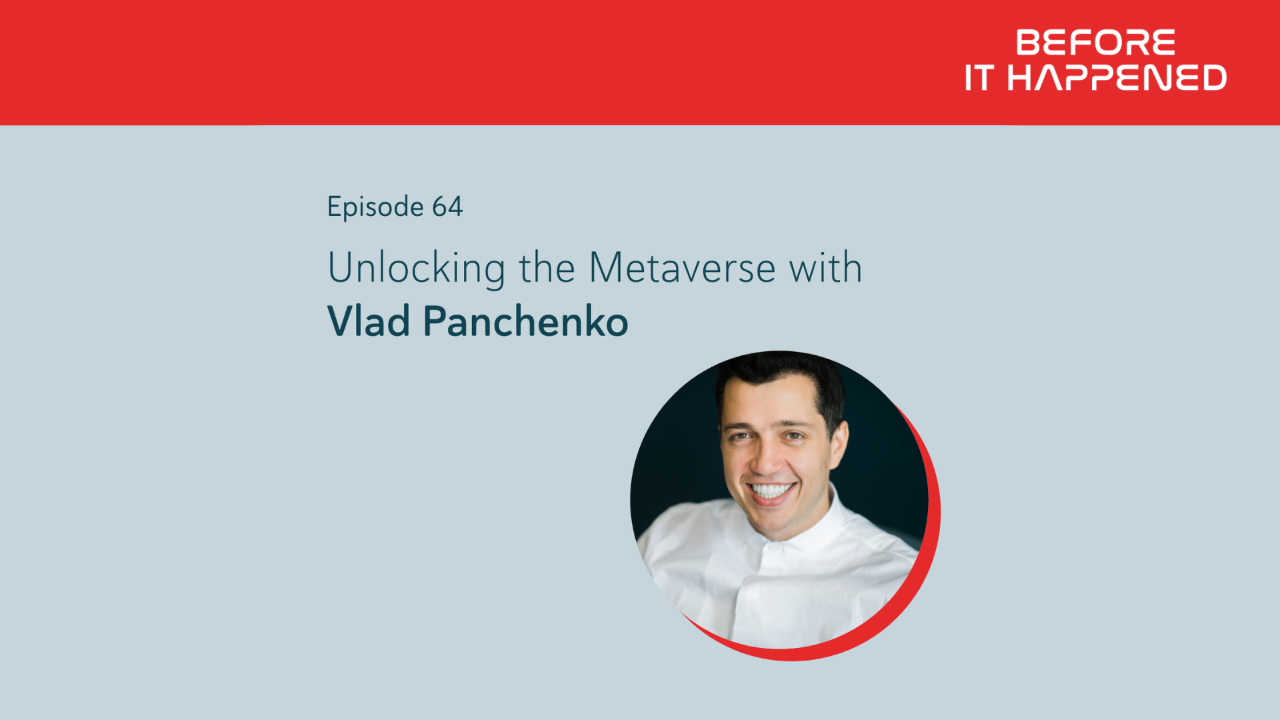 For nearly as long as he’s been gaming, Vlad Panchenko has been building mega-platforms to connect gamers with one another and enable trading and in-app purchasing – essential community assets that hook users and provide exponential growth to this $800 billion ecosystem.

Early in his entrepreneurial journey, Vlad Panchenko learned the virtues of being a cog in the machine. The founder and CEO of the hot Web3 games marketplace DMarket, he started his career in Ukraine at the age of 16, translating pirated video games from English into Russian and Ukrainian, spending “all my free time between school and sleep,” in an all-consuming job where his “salary was calculated by kilobytes of text.” Byte by byte, Panchenko earned the cash to buy a computer, gleaned enough English to become fully fluent, and gained valuable insights that would set him on a course to one day build a massive metaverse community and exchange.

History was his favorite subject in school, and as he dove deeper into the gamer community, Panchenko observed trends, and “history taught me to understand the world, what’s coming tomorrow. It brought the idea that technology is going to change the world – and I have to be there!” Understanding tech from the inside out was always a motivation. “I was one of the first in Ukraine to understand how eBay works, how PayPal works … and I was constantly bending the rules.” In 2008, he founded Suntechsoft, with a mission to connect games wholesalers, retail shops, publishers, and marketplaces, while still “keeping that old-school gaming community sense of friendship and humor.”

Then came the emergence of cryptocurrencies and blockchain. A voracious reader,  Panchenko was transfixed by Satoshi’s 2008 Bitcoin whitepaper. He started trading crypto and learned the hard way about the dangers of unregulated trading exchanges when he lost “more than I could afford to lose” in the Mt. Gox collapse. But his belief in the power of blockchain and decentralization stuck, and by 2016 he’d started Skins.Cash, for trading in-game and in-app assets.

One day he had an epiphany. “I was getting a lot of emails from customers telling me stories about why they’re using it and how it helped them,” he says. “With my right hand I was scrolling the emails, and with my left hand I was reading another technical white paper. I realized, wait a second, I can scale this to even more games and the whole gaming industry.”

Founded in 2017, DMarket is based in Panchenko’s adopted home of Santa Monica.

"I knew from the very beginning that I'm ambitious and I'm gonna build, one by one,  bigger and bigger companies,” he recalls. “And the biggest one could be built only on the US soil." DMarket is a blockchain-based marketplace to trade virtual items and technology for building metaverses, and a go-to community for brands, influencers, video games, eSports organizations, broadcasters, and entertainment industry developers. With over 3 million active users, the platform also connects an ecosystem of about 10 million gamers, trading about $6 million in digital transactions a month.

Panchenko’s Ukrainian roots run deep. With the threat of a Russian invasion last year, he wanted to protect his more than a hundred staffers working from Ukraine. About two weeks before the war, he convinced DMarket’s board that it was worth the investment to evacuate his employees. “Chances that Russia will invade are like 20%,” he said at the time, but “if they invade, then the risks and the consequences for the company and for the people go through the roof.” He chartered a plane and flew 100 staff members, along with their families and pets, to Montenegro. At the same time, he spearheaded a fundraising effort on DMarket’s home page, and has raised to date more than $17.5 million in funds for Ukraine. He also met with California senator Dianne Feinstein, who brought his concerns to the capital, and was influential in raising more than $1 billion from the US government in relief. He also froze the accounts and assets of Russian users, who totaled more than a third of the platform’s users. He won’t do business with countries that “are killing my friends on the street.”

Even with all the atrocities of war in his home country, Panchenko remains optimistic about the future. He finds inspiration in the global connections made possible by technologies like cryptocurrencies and the metaverse. “My belief in humanity has grown tenfold after seeing what people are able to build in video games. Technology and games become social networks, connecting us in one universe, where a hundred percent more people will be joining the industry, and we will learn how to better communicate and share our creativity.”