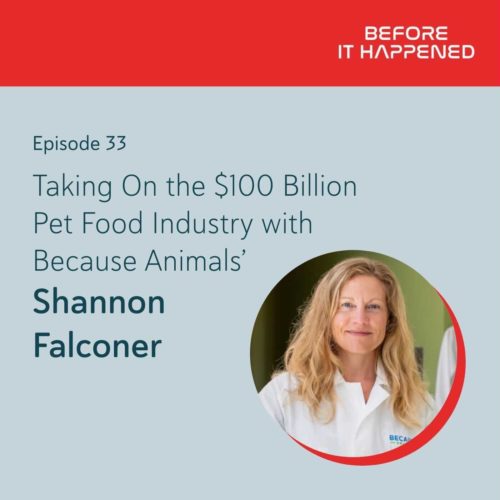 It was an ethical decision that she made because of her love of animals. Raised an only child in suburban Toronto, Canada, Shannon was very close with her three dogs and three cats. To her, the decision was easy—she looked at her animals as her own siblings—but she willingly gave her pets the meat-based, commercial pet food readily available on store shelves. Why willingly? Because no real alternatives existed.

As an entrepreneur, she’s trying to change that.

“Animals have always been a huge part of my life,” she told me. “My best friends were animals as a kid. Very early on, I saw that there was no difference between my dogs and cats that I loved so much and the cow or the pig in the pasture. I knew my pets craved meat—it’s their ancestral diet. But as I got older, it got more difficult to reconcile that with supporting the animal agriculture industry to feed my animals when I didn’t support them when it came to feeding myself.”

Shannon is the co-founder of Because, Animals, a Silicon Valley-based startup that is developing cultured meat products for pets. Shannon herself is a PhD with a background in microbiology and biochemistry and while doing post-doctoral research at Stanford, she came up with the idea for a startup that produced cultured meat—meaning it’s made grown in a lab from just a few animal cells—to use as an alternative to traditional pet food. The goal was to disrupt a pet food industry that was badly in need of disruption. The only problem? She had no background in business and her work experience was mostly limited to laboratory research.

In 2016, she was introduced to a fellow Canadian who was studying in the U.S. named Josh Errett. Josh was completing his MBA at Indiana University, but he and Shannon shared some mutual connections—and they’d even volunteered at the same rescue shelter in Toronto.

They bonded over their mutual love of animals and Josh was even a vegetarian himself. He agreed to come aboard and help her launch Because, Animals.

In August 2021, they brought their first lab-grown meat product to market—a line of cat treats made with tissue grown from stem cells taken from mouse ears. But the process doesn’t involve slaughtering the donor mice—they’re put under a mild anesthetic while scientists pierce their ears to take samples.

The company has raised nearly $7 million over five seed funding rounds and people have begun to take notice. Though she doesn’t expect their flagship cultured meat products onto shelves until 2024, they’re already garnering media attention, as well as accolades from both the startup and pet food communities. Shannon was named one of the 40 Social Entrepreneurs to Watch in 2022 by CauseArtist. And in 2020 Because, Animals was recognized by pet food giant Purina, which gave the company one of its coveted Purina Awards, which are handed out each year to the most innovative startups in the industry.

And all of this momentum is coming at a good time for Because, Animals, which now finds itself on the cutting edge of a pair of industries valued at more than $100 billion. The American Pet Products Association says pet food sales topped $100 billion dollars in 2020—an all time high.

Meanwhile, the market for meat alternatives is expected to hit $140 billion dollars in the next 10 years—which would account for about 10 percent of the global meat industry.

“I think the writing is on the wall,” Shannon said. “Animal agriculture, in addition to being inhumane, is also a leading driver of climate change. I think people are starting to understand and see what some of the consequences of climate change are and they’re starting to realize that we need to start doing something. Pet food is a huge industry. And they say they use sustainable practice—sure, in the sense that it’s sustaining the most unsustainable practice in on earth. So this is exactly why we’re targeting them.”