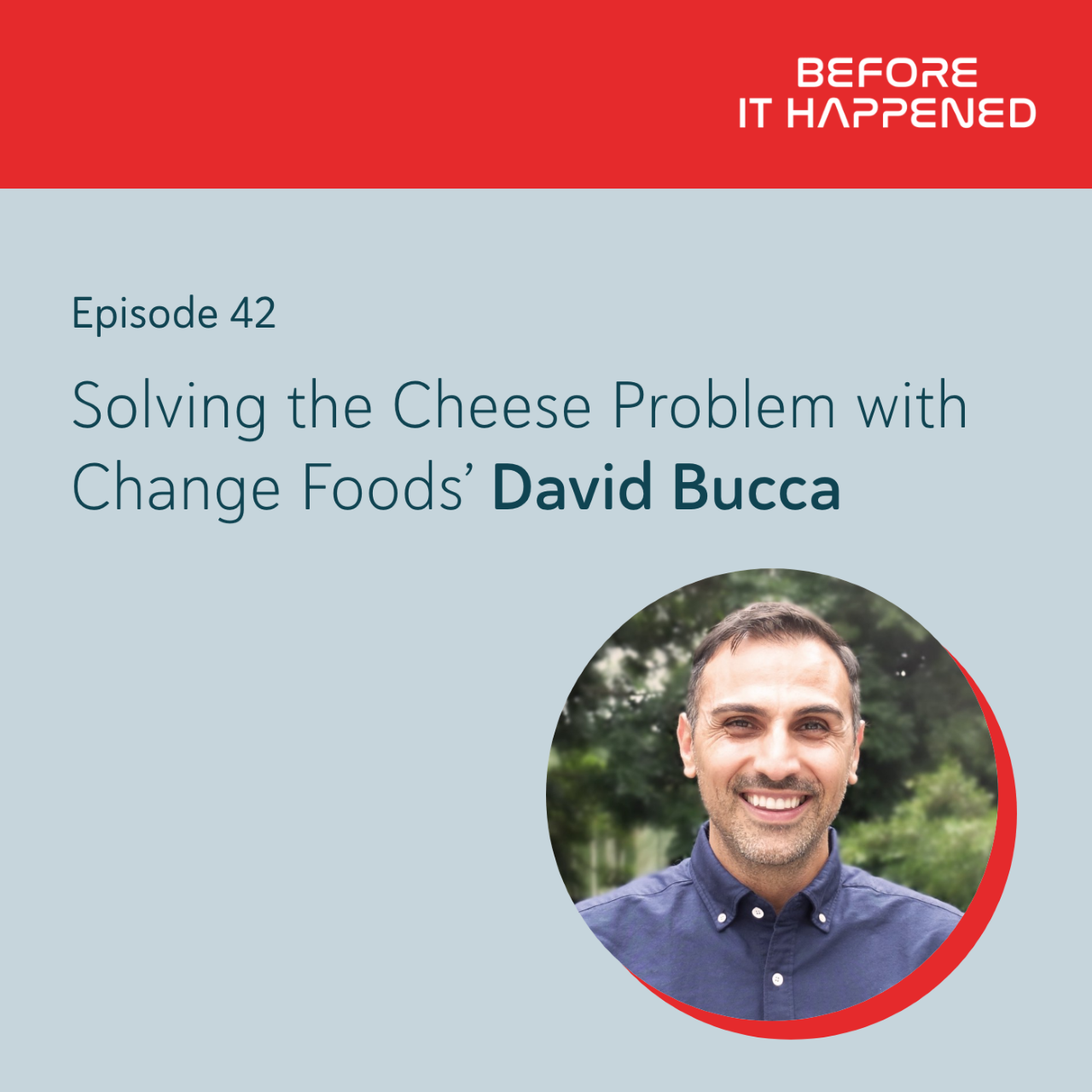 When David Bucca decided to leave a successful career as an aerospace engineer to launch the animal-free dairy startup Change Foods, the only thing he knew about cheese is that he no longer ate it.

Throughout his life, and certainly during his time developing aircraft for companies like Boeing and Airbus, David maintained a carnivorous — or at least omnivorous — diet. He had grown up in an Italian household in Melbourne, Australia, which meant that food was at the center of just about everything they did. It also meant that most of that food — meats, egg-based pastas and, yes, cheese — came from animals.

But in 2017, he became a vegan literally overnight after meeting the environmental entrepreneur Thomas King, a vegan himself who was also interested in developing alternative proteins that were free of animal products. He started studying our food system and the animal agriculture industry and started to completely rethink his relationship with what he ate.

“I was getting educated and understanding how our protein is actually produced,” he told me. “The pragmatic side of me really clicked with the fact that something had to change and it had to change dramatically. And from my experience in aerospace and engineering, I knew in my mind what had to be done and the order and the process to do it. And I couldn’t see anyone else doing it. Once I connected all those things together, I knew I had to do something about it.”

In 2017, after joining King in becoming vegan, the two paired up to start Food Frontier, a non-profit think-tank that worked as an accelerator for new plant-based and “clean” meat products in Australia. Two years later, David himself decided to get into the product-development business himself and launched Change Foods, a company that he hopes will revolutionize the dairy market — a sector of the alternative food industry he felt had been underserved.

“I took my time to figure out what I wanted this company to be,” he said. “I didn’t want to rush into anything and I wanted to take the time and figure out all of the possibilities. I thought that cheese — dairy — would be the most revolutionary. It was needed. There was a real lack of people focusing on dairy.”

He teamed up with his eventual co-founder and now CTO Junior Te’o, a professor at the Queensland University of Technology. Together, they developed a technique called precision fermentation, which had previously been used to make insulin. Using the process to make dairy alternatives, Change Foods genetically modifies several different microorganisms, including yeast and fungi, and then ferments them using sugar. The result is a compound that is almost identical to those found in dairy products.

“We knew that precision fermentation was going to be very disruptive,” David said. I love that it’s still a cell-based technology but can recreate bio-identical compounds.”

The company is headquartered in Palo Alto, but maintains a research and development facility in Australia. In fact, Change Foods is still in R&D mode — David confessed he still has yet to sample their product.

“We’ve smelled it, we’ve played around it, but we haven’t actually eaten it yet,” he said. “But it’s still in the lab. Until we get it into a food-grade facility, we’re not going to eat it. But it’s exciting to think about. All we’ve ever known about dairy is that it comes from milk, and milk has limitations. By rebuilding dairy from the ground up and selecting certain components, we can keep away all of the nasty. So we’re recreating cheese without antibiotics, without cholesterol. So we’re not just making remaking cheese, we’re making it better.”