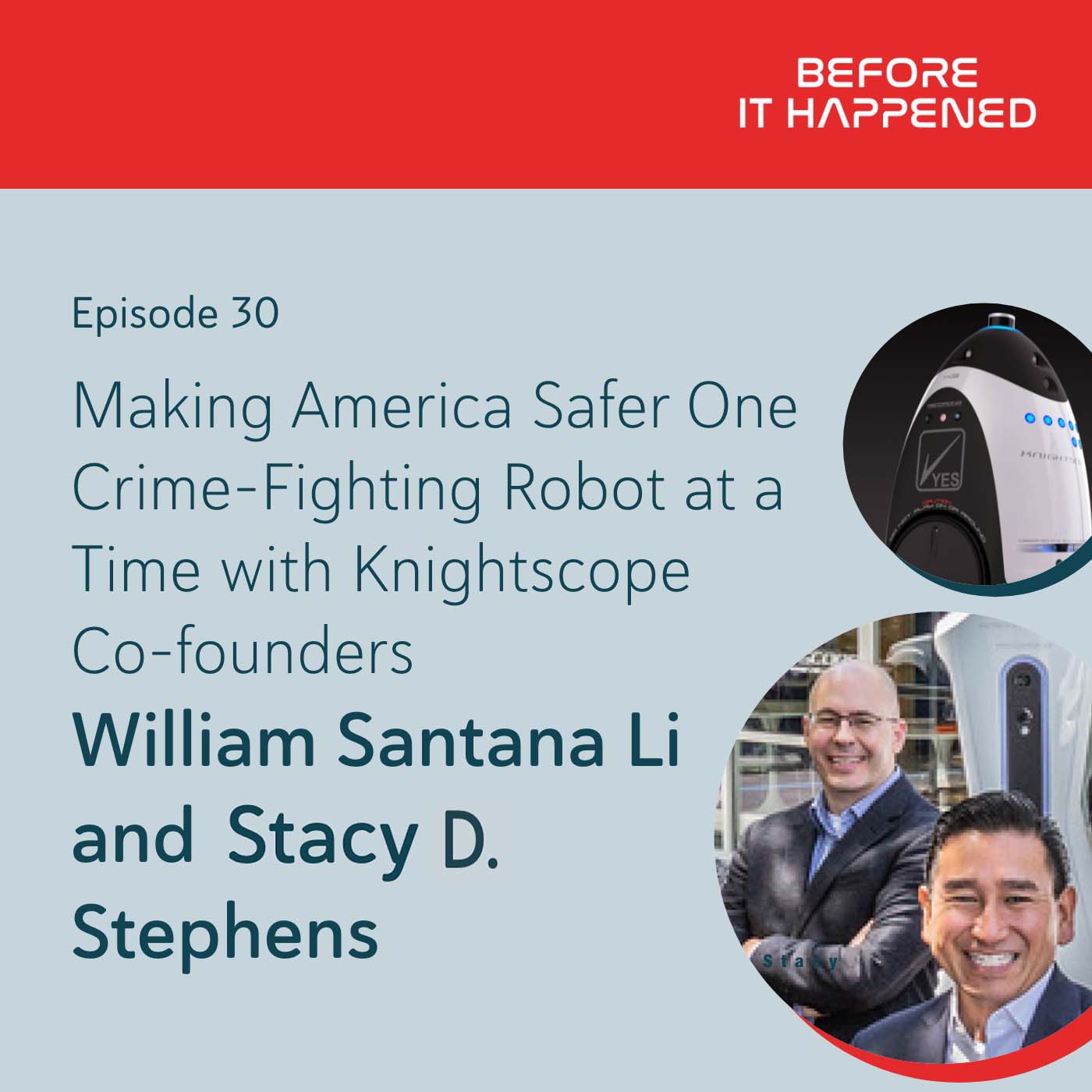 Imagine a world in which a theft or an attack is thwarted by a life-sized robot that was programmed to prevent crime.

It sounds like science fiction, doesn’t it? In fact, it sounds almost exactly like the Robocop film franchise. Except in the case of Knightscope, this is the future they’re imagining—and in some ways, it’s already here.

Knightscope’s founders William Santana Li and Stacy D. Stephens are my guests this week and we had a discussion around AI and its capabilities that I’ve always wanted to have on Before It Happened. I’ve talked to several experts in the field of AI and robotics who have done a great job of explaining what AI is and isn’t and what people get wrong about its capabilities. But William and Stacy came on the show to talk about a very real and very exciting application of artificial intelligence that is already making people’s lives better.

Knightscope's mission is simple: Make America the safest country in the world through the use of autonomous security robots that assist human-led security forces with technology that helps detect, deter, report, and, ultimately, save lives.

“This is not a popular thing to say, but we just don't have enough officers and guards to do the job appropriately,” William told me.

Stacy added: “It's not like you have to constantly monitor what's going on, the robots and the software are doing a lot of that heavy lifting for you.”

The pair founded the company in 2013. William had spent years as an executive with Ford Motors and Stacy was an engineer and entrepreneur who had spent time in law enforcement. They were inspired to move ahead with their vision after the tragic Sandy Hook shooting in 2012.

“I remember [William] saying to me early on that he was watching TV after Sandy Hook and the police were there and the fire department was there and ambulances were there and you’d see this aerial shot of people just standing around,” Stacy said. “It looked like nothing was happening. They were all standing there trying to gather intelligence on the ground. Our robots in a situation like that could be inside that building giving eyes and ears back to the people outside in real-time. That was the thought at the beginning.”

“Initially we were focused primarily on business to business,” William said. “Anywhere you might see a security guard, that’s an opportunity for us.”

But now the company is looking at partnering with state and local law enforcement agencies as well as the federal government to help secure the tens of thousands of buildings under management by the U.S. General Services Agency. William and Stacy say the ultimate goal is to have eyes and ears on the ground to enhance all of our law enforcement and security patrols 24 hours a day, seven days a week. The way they see it, Knightscope’s success means everyone is safer.

“If the criminals win, if the terrorists win, nobody wins,” William said. “If Knightscope wins, we all win.”