Breaking Down the Business of Story With Park Howell – Episode 35 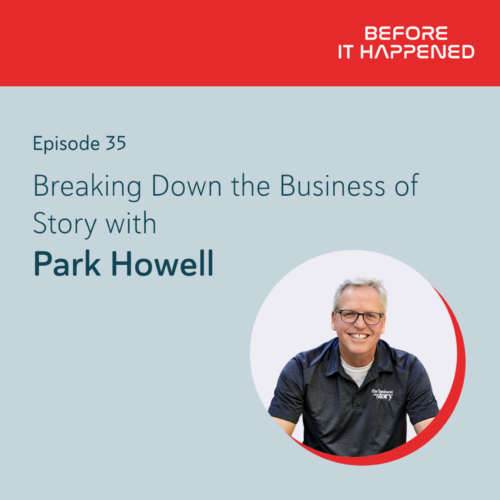 When it comes to selling a business, brand, product, or service, no one understands the power of storytelling more than Park Howell.

Park’s business is storytelling—his consulting firm is called The Business of Story, after all—and his mission is to help purpose-driven businesses and challenger brands share their stories with the world. In doing so, he’s turned himself into a multi-media mogul. He’s a brand strategist, keynote speaker, storytelling coach, podcast host, and bestselling author. And as it turns out, perhaps not surprisingly, he has a fascinating story of his own.

Park was born and raised in Seattle, Washington before it became a booming tech hub. Park’s Seattle was a sleepy logging town in the Pacific Northwest. He put himself through school by working as a laborer—his father was a contractor—and before he discovered his love of writing stories, his first interest was writing music. He studied music composition at Washington State University and says he still applies the principles of songwriting to his method of storytelling, today.

“I’ve applied everything I learned in my musical studies to the work I’ve done over the past 35 years in advertising and branding,” he told me. “Everything is still about flow and rhythm.”

After college, Park looked to his fallback option—his second major was public relations—to find a job and soon landed work as a copywriter with a string of advertising agencies in the Seattle area.

“I really enjoyed the idea of commerce and creativity coming together through advertising and public relations,” he says. “And my preference was writing ads versus writing press releases. You could tell a story with ads and that’s where my interests were.”

Park left Seattle amid a regional recession and relocated to Phoenix, Arizona, which, at the time, was enjoying a booming economy. He quickly found work writing ads for an agency that focused on commercial real estate and, before long, decided to launch his own firm. In 1995, he started Park & Company, a full-service agency that touched all areas of the advertising spectrum—TV, radio, print and direct mail. At the same time, the traditional media industry was becoming consumed by digital, and Park noticed something was off. The kind of messaging that had dominated advertising for decades wasn’t working anymore. There needed to be a new way of reaching people in this new digital world.

“My son was in film school at the time, and I asked him to send me some of his textbooks,” he says. “I wanted to know what Hollywood was teaching people about storytelling. And that’s when I started learning about the hero’s journey. And it occurred to me that this was a powerful framework that Hollywood knows—but it’s been around since the beginning of storytelling. So why couldn’t we use it in the business world?”

It was a realization that would change Park’s life, career and mission. He soon developed the Story Cycle System, which has become best known for what he calls the “ABT Framework,” which stands for “And, But, Therefore.” It’s the method he has gone on to apply to work he’s done with countless brands over the years and has now become his calling card. ABT has been at the center of both of his bestselling books Brand Bewitchery and The Narrative Gym and he’s taught it all over the world as a consultant and keynote speaker.

Park says he tries to stress to businesses the importance of not just their story, but also understanding their audience. Understanding both, he says, becomes a superpower.

“We live in a noisy world,” he says. “The key to survival is to identify the specific problem you’re solving for your very specific audience—it doesn’t matter how narrow. Then you just keep hammering that home. You can’t get distracted. If you’re not standing out among your audience, you’re just blending in.”